Sensors are playing a massive role in turning todays homes into Smart Homes with appliances ranging from doorbells to thermostats. Using IoT functionality these `smart´ products employ built-in sensors to trigger many operations and are capable of automatically turning on once human activity is recognized. As these products are connected to a network, they are able to interoperate and provide services identifying, analyzing and anticipating human behavior.

Socionext has been exploring the potential of new sensing technologies and has developed a range of radar sensor products not only for home applications but also for mobile devices and industrial equipment.

A radar sensor is an electronic device which is designed to detect the position and movement of an object at a certain distance. The sensing range for a short distance is up to several meters and they can detect any object that falls within the detection zone. They work with electromagnetic waves that are reflected off objects and travel at a known speed. They are affected less by foam, fog, powder and dust that can interfere with signals in other sensor technologies. Additionally, they can operate behind non-metallic surfaces, walls, glass or plastic housing

Radar sensors can detect location and movement of persons without recording images or sounds, and therefore offer anonymity.

In the past many IoT devices have utilized Passive Infrared (PIR) as a movement detection sensor. PIRs have been in the market for a long time and are well-established. For many years, it has been the single choice for motion detection in security applications. But PIR sensors have certain limitations that are not desirable in Smart Home applications. PIRs only offer single type of data – that is ON and OFF. For modern IoT devices in a ‘Society 5.0’ this is not enough. Modern radar sensors with FMCW sensing mode offer more information than only motion detection on/off like distance and presence and in case the radar is equipped with multiple antennas the sensor can also output information about the angle. Radar technology is more robust against environmental conditions. Altogether radar sensors have much less false detection than PIR sensors.

The disadvantage with a lot of today’s solutions, however, is that they are often a module design of several components. The radar sensor is connected to an external antenna which requires in-depth know-how of analogue RF design for antenna and PCB design. The output of such a sensor is an I/Q data that needs high performance signal processing on the host CPU and software algorithms to calculate the distance.

So, with this in mind Socionext, a leading provider of RF CMOS Sensors, has designed a series of single-chip, highly integrated, 24GHz and 60GHZ Radio-wave Sensors with ultra-low power consumption.

The SC1230 Series includes 2 products that can detect location and movement of individuals with an ultra-high degree of sensitivity. The SC1232AR3 measures the presence and the distance of an object while the SC1233AR3 adds the ability to detect direction

This series is able to achieve ultra-low power consumption in an ultra-compact format, of 9mm x 9mm, whilst at the same time offering high performance. By incorporating basic signal processing functions into the sensor device, the number of external components is reduced which means it is easier to use without any special knowledge of signal processing. The All-in-0ne package consists of a built-in antenna, radio circuit, A/D converter and ranging calculation circuit, and comes with a built-in motion detection function that detects the distance to an object and flags when movement is detected. The detection result can be quickly read after setting up the system from the host MCU via I2C/SPI. It operates at an average power consumption of 0.5mW for detection of persons operating at 0.1% duty cycle in motion detection mode.

Thanks to its embedded voltage regulator the chip can operated with a single power supply of 1.8V that reduce design complexity and BOM cost

The SC1232AR3 has a digital beam shaper feature which enables Field of View (FOV) selection of either 120° or 95°. Reducing the FOV to 95° allows the radar sensor to operate more accurately in narrow rooms because potential reflections are avoided. Detection range is 8m in the front direction. 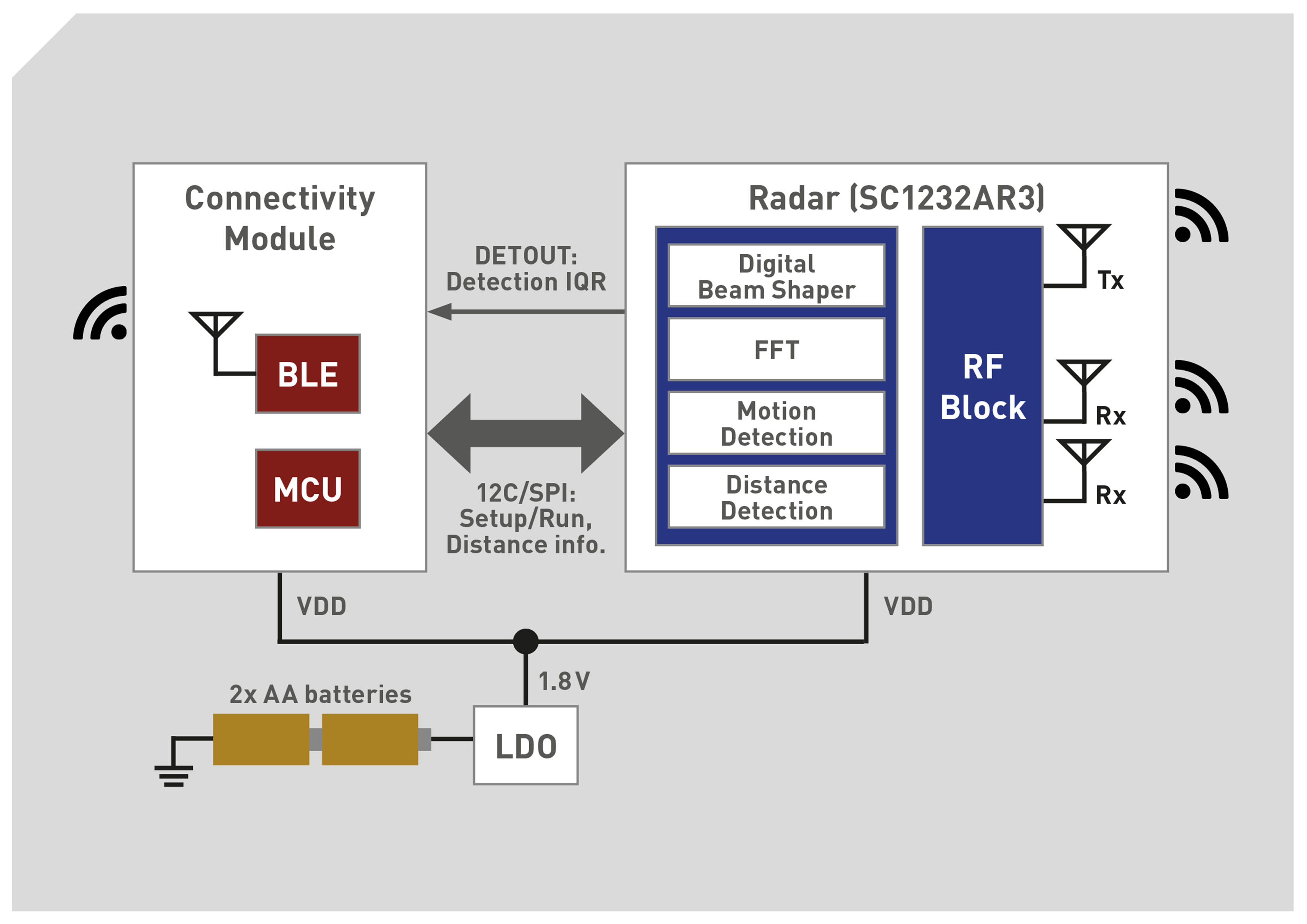 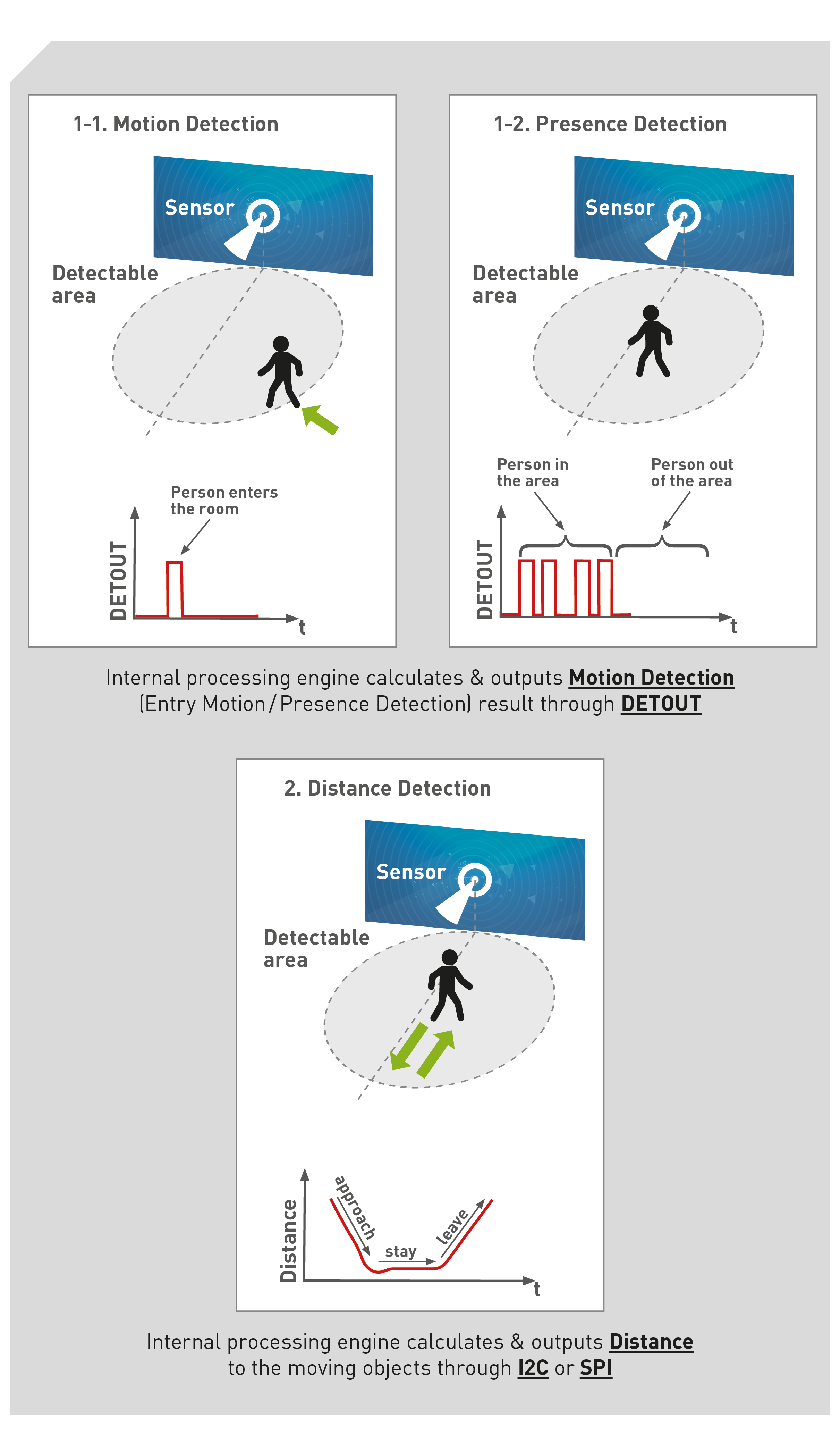 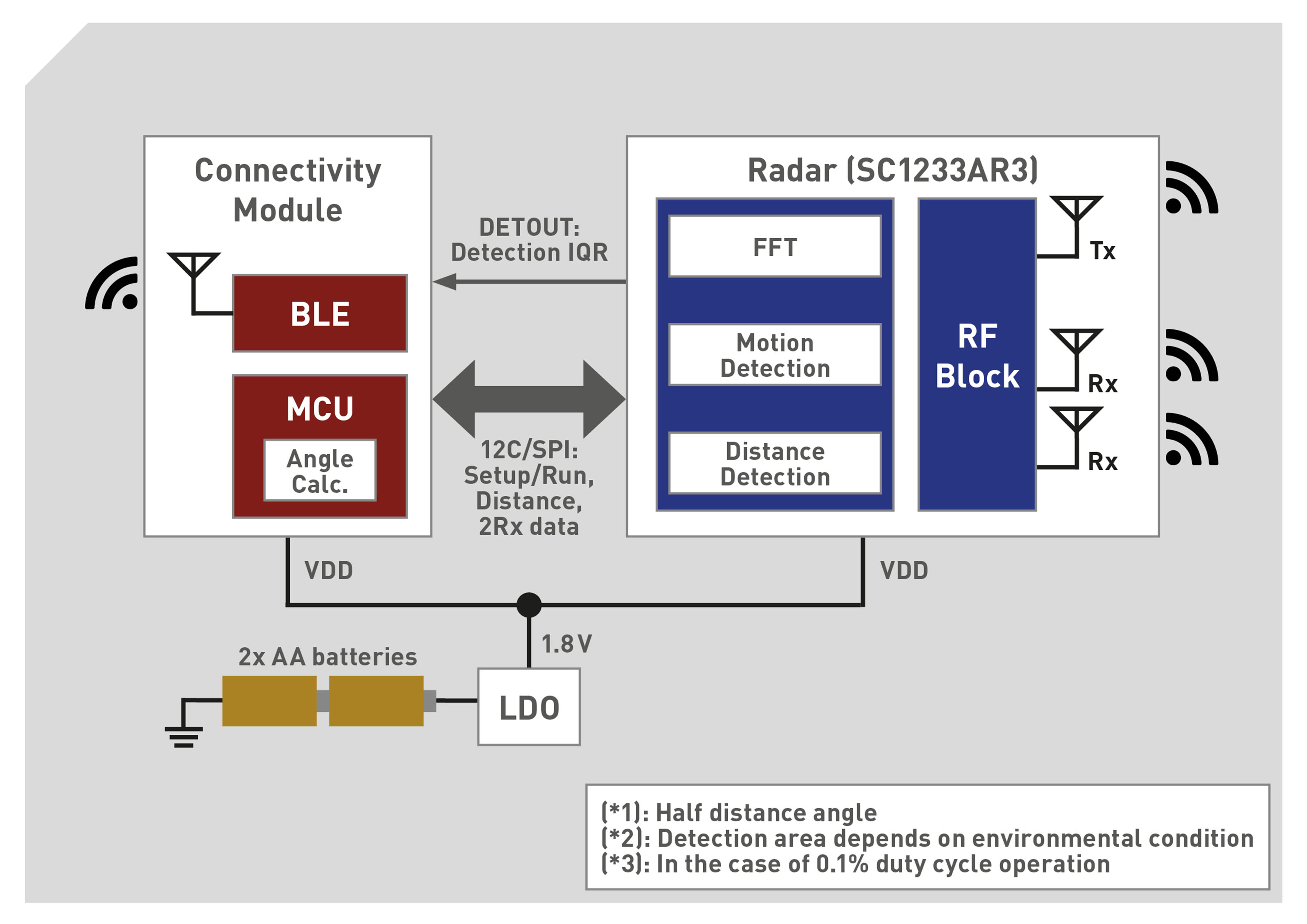 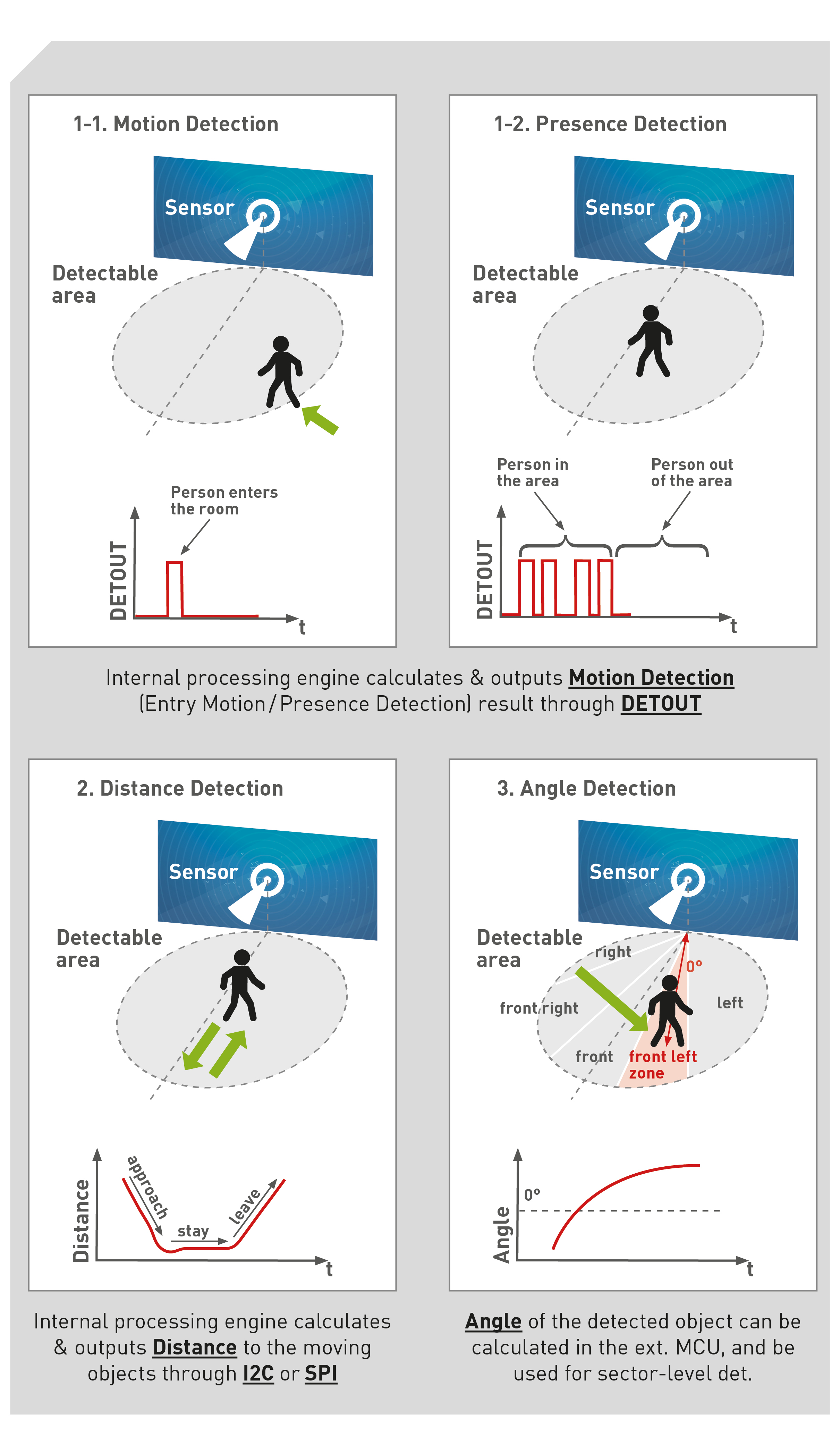 The SC1233AR3 has a dual receiving antenna system which allows 2D angle detection. FOV is 120° with a detection range of 8m in the front direction. For angle detection it outputs pre-processed data via the built-in signal processor, so angle information can be obtained with a simple sample calculation using an external MCU.

The SC1220 series integrates multiple antennas for receiving and transmission. This makes the series ideal for advanced applications that require not only detection and localization but also classification of objects and movements, such as the operation of devices by hand gestures.

Due to the very high bandwidth of up to 6.8GHz, movements can be detected in the millimeter range. They operate with a very low consumption of power of 1 – 2.5mW, are very highly integrated and easy to use and incorporate antennas, signal processors, FIFO memory, SPI interface and intelligent power control sequencers. As with Socionext’s other devices users do not require advanced knowledge in handling high frequency devices.

These sensor devices represent the type of smart devices that are required to advance towards the super smart society of “Society 5.0” that balances economic advancement with the resolution of social problems by a system that highly integrates cyberspace and physical space.

Exploring the potential of new sensing technologies and developing new radar sensor products, Socionext aims to expand their usage not only for home applications but also for smart mobile devices, industrial equipment, security and surveillance.